5. May 2022 by Benjamin Furtlehner, Petra Schiefer
The archaeologists Katerina Douka and Tom Higham examine ancient fragments and bones to better understand how humans evolved. In two videos, the radiocarbon dating experts explain their research – and why fun is an important part of it. 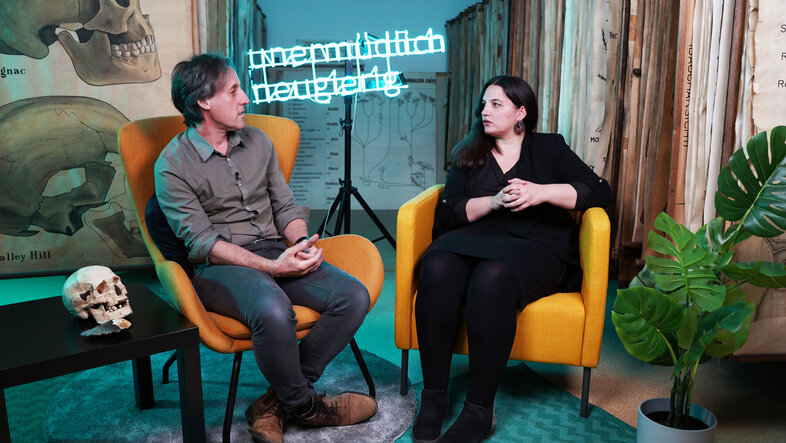 Why are we the only humans left? Katerina Douka and Tom Higham want to solve one of the great mysteries of human history. © University of Vienna

Her "love for human origins" is what drives her to do research: Archaeologist Katerina Douka examines ancient DNA, hidden in tiny fragments of fossilised bones, to learn more about early human history. She says, turning to her research partner – and husband – Tom Higham, that "science and research is all about fun and being curious". We brought the two internationally renowned radiocarbon dating specialists, who recently left Oxford to join the University of Vienna, in front of the camera to find out: What motivates them and why they love human origins.

You may also read
Archaeological Science as Game-Changer
What ancient genes tell us about who we are
Using the latest scientific methods, Tom Higham and Katerina Douka from the University of Vienna want to solve a great mystery of human evolution: Why are we the only humans left?

Play Video
What motivates Katerina Douka and Tom Higham? Watch the video to find out more!

Why are we the only humans left?

50,000 years ago, we shared this planet with different human species, among them Neanderthals, Homo floresiensis, Homo luzonesis and the Denisovans. In her research, Katerina Douka and Tom Higham want to find out why they disappeared from Earth – Homo sapiens thus being the only remaining human species. "We now know that Homo sapiens has interbred with all these archaic species", says Douka und Higham adds, "Now the big question is: What happened exactly when they met?".

In the video, the two archaeologists explain how they are going to find the answer to this question and why there is a direct link between who we were 50,000 years ago and who we are today.

Play Video
How do ancient genes affect our lives today? Watch the video to find out more!
© feelimage - Matern
© feelimage - Matern
Katerina Douka is Ass. Prof. at the Department of Evolutionary Anthropology at the Faculty of Life Sciences. She is part of the Human Evolution and Archaeological Sciences research network (HEAS).

She specialises in radiocarbon dating, in particular the development of new protocols for decontaminating archaeological material, as well as the statistical interpretation of AMS results using Bayesian modelling.