11. November 2022 by the editorial team
"Sometimes, you need to trust your intuition and your crazy ideas a bit" – the award of the Nobel Prize to Anton Zeilinger proves how right he was in saying so. The physicist from the University of Vienna has received the prestigious academic award for his groundbreaking work in the field of quantum information. 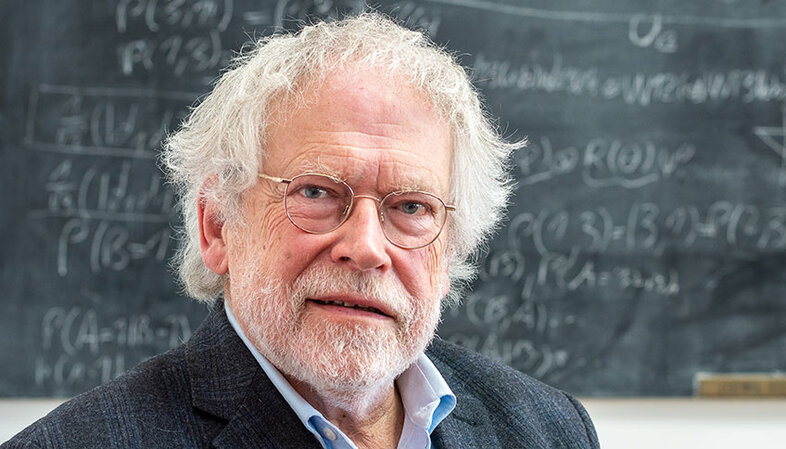 Anton Zeilinger is considered a pioneer in the quantum information transfer using photons which is "fundamentally important in the transmission of information in quantum computers," explains the newly awarded Nobel Prize laureate. In the past decades, he achieved several breakthroughs in his discipline and has set transmission records. © Jacqueline Godany 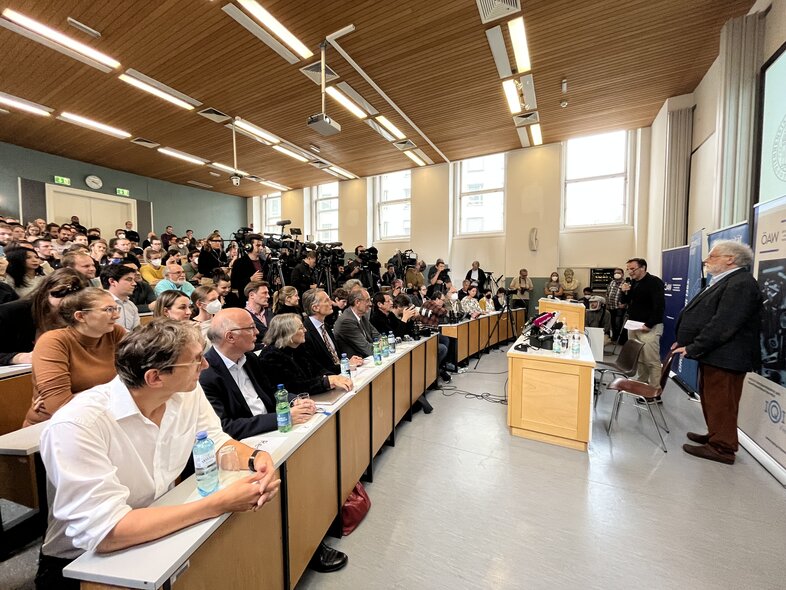 Since the very beginning, Zeilinger was fascinated by experiments "that were completely counter-intuitive". Anton Zeilinger talks to the enthusiastic audience shortly after the announcement of the Nobel Prize laureates in an event organised at short notice by the University of Vienna and the Institute for Quantum Optics and Quantum Information (IQOQUI) of the Austrian Academy of Sciences. © University of Vienna

"One day, we will have really understood quantum physics ..."

"... which will be even more revolutionary than the achievements of Copernicus and Columbus," predicts the newly awarded Nobel Prize laureate Anton Zeilinger in front of a packed audience in the Ludwig-Boltzmann lecture hall at the University of Vienna. Today, all cameras are focusing on him: Together with his colleagues Alain Aspect and John F. Clauser, the Austrian physicist is going to be awarded the most important academic award for their groundbreaking findings in the field of quantum physics – this was announced by the Royal Swedish Academy of Sciences in Stockholm on 5 October 2022.

The emeritus professor of the University of Vienna had been considered a likely candidate for the coveted award for quite some time, but when he actually received a phone call from Sweden he was still "very surprised", admits the 77-year-old Anton Zeilinger, "But there are so many others." What makes the 'quantum guru' with the bushy beard so special? 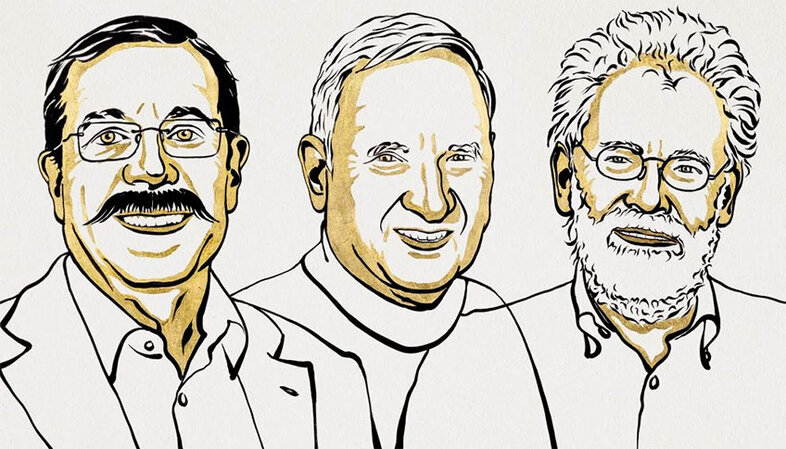 Anton Zeilinger and his co-laureates Alain Aspect and John F. Clauser have received another very prestigious award before – the 2010 Wolf Prize. Zeilinger is already looking forward to meeting his colleagues again at the award ceremony in Stockholm in December. © Niklas Elmehed Nobel Prize Outreach

From fundamental questions to concrete applications

The Swedish committee declared that his pioneering work in quantum information and his experiments with entangled photons "bridged the gap between fundamental questions about nature and concrete applications". "Quantum physics will only actually be in full use if we no longer have to carry something like this around," Zeilinger counters and holds up his mobile phone. However, his personal focus has always been on basic research: "I can very proudly tell you: This is not good for anything. I only do it out of curiosity." This is what he has always replied to the question of "What is this good for?", Zeilinger tells the audience in the packed Ludwig-Boltzmann lecture hall at the Faculty of Physics of the University of Vienna at the press conference after the announcement of the Nobel Prize laureates. 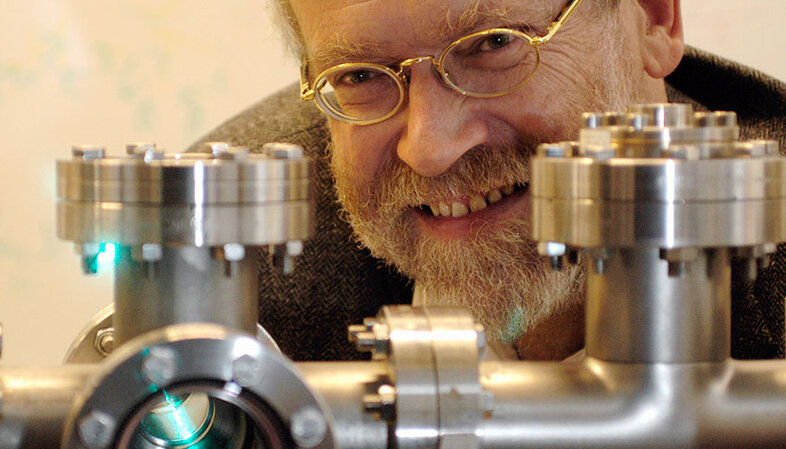 Anton Zeilinger thanks his family first and, immediately after, the European taxpayers and explains that this prestigious award is based on the opportunity to investigate the phenomena that really interested him early on, regardless of whether this would be of any "use". © Jacqueline Godany

How it all began…

And Anton Zeilinger has always been driven by curiosity: Already as a child, he used to "disassemble" things into their individual components to understand how they work – putting them back together afterwards was never as interesting, Zeilinger tells us. The exceptional physics talent was born on 20 May 1945 in Ried im Innkreis (Upper Austria) and grew up in a family in which science was valued. One of his teachers at the academic secondary school in Hietzing, Vienna, managed to stir students' enthusiasm for complex relationships: Five of 22 classmates, including Zeilinger, ended up studying physics. Zeilinger studied mathematics and physics at the University of Vienna and was "extremely lucky" that his doctoral supervisor was Helmut Rauch, the Austrian pioneer in the field of quantum optics.

"I do not want to do any mainstream things," Zeilinger told the Austrian Press Agency in 2020. This has been his credo already early on. At the beginning of his career, many issues in the field were still "completely philosophical" and theories about quantum physical states were dismissed as "crazy ideas". But sometimes you need to "trust your intuition and your crazy ideas a bit," Zeilinger can proudly say today.

Video summary of the press conference with Anton Zeilinger (in German)

Just like Helmut Reich, Zeilinger initially worked with neutrons, but he soon focused on the investigation of fundamental questions in quantum physics. Following his habilitation at TU Wien and an appointment as research assistant at the Atominstitut Vienna, Zeilinger conducted research all over the world. Among other things, he was young Fulbright Fellow at the renowned M.I.T., where he also met future Nobel Prize laureate Clifford G. Shull. 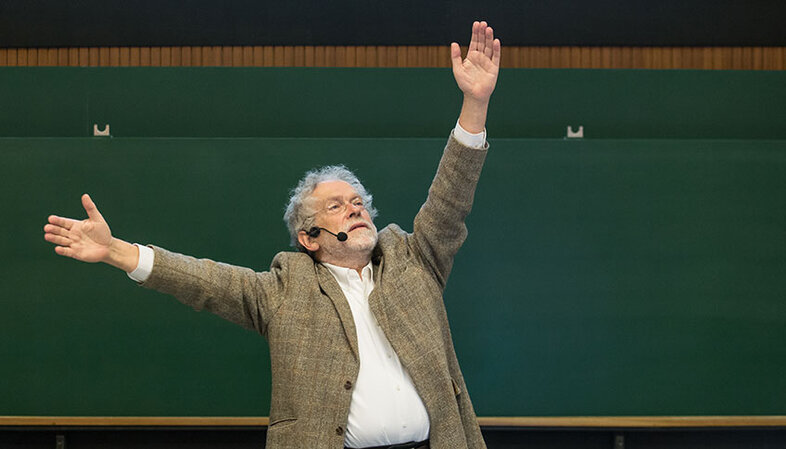 Farther and farther, higher and higher: From Clifford G. Shull, who received the Nobel Prize in 1994, Zeilinger has slowly but surely learned that "when you do something and believe that you are already happy with the result, it pays off to go into detail even further." Image: Zeilinger during a physics lecture targeted at the general public in 2013. © derknopfdruecker.com

The career of a distinguished expert

This is where he also began to focus increasingly on the quantum physics phenomenon of entangled photons and, together with his colleagues Daniel Greenberger and Michael Horne, he described the 'GHZ state' (in case you wonder: the name is derived from the initials of the physicists), which refers to the entanglement of three particles. The special thing about it: In contrast to the Bell inequalities, four measurements suffice to show the correctness of the quantum mechanics. It took until the late 1990s until Zeilinger and his colleagues succeeded in conducting the associated experiment – and, with it, in providing proof of the theoretical predictions.  To this day, the GHZ experiment is considered one of the most important findings by Zeilinger. 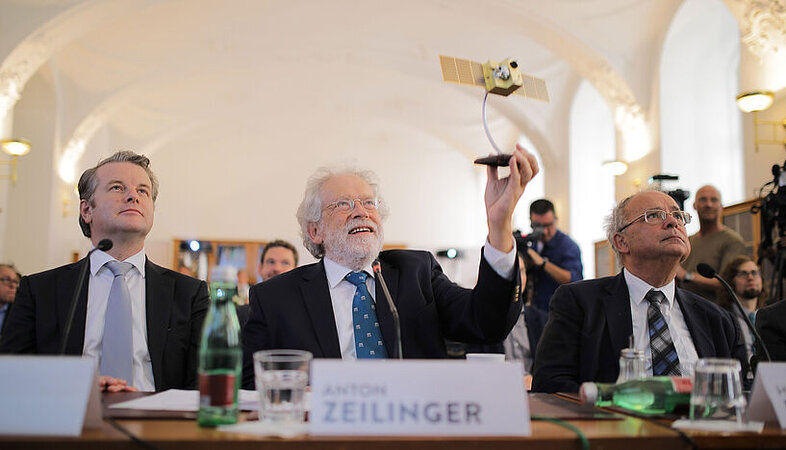 In 2017, Anton Zeilinger, President of the Austrian Academy of Sciences at the time, and Heinz W. Engl, former Rector of the University of Vienna, held the first intercontinental quantum video conference using a model of the satellite 'Micius'. © ÖAW

But that was not all: In 1997, Zeilinger succeeded in the first teleportation of light particles, earning him the nickname 'Mr. Beam'. Also in 1997, he gave a demonstration of the encrypted transfer of money via quantum cryptography at Vienna City Hall and held the first secure quantum video conference with his colleague Chunli Bai in China. At the University of Innsbruck, he eventually initiated the experiments with entangled photons for which he will be presented the Nobel Prize in Physics in a ceremony in Stockholm on 10 December 2022. 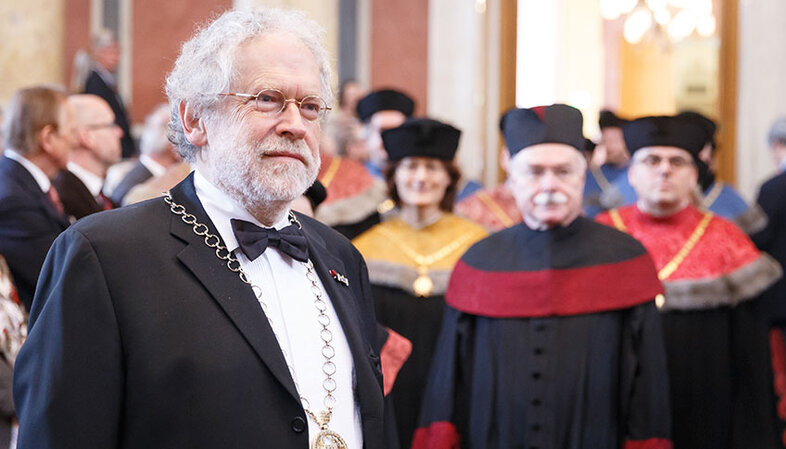 Following professorship positions in Innsbruck and Munich, he had been Professor of Experimental Physics at the University of Vienna since 1999, and has been Emeritus Professor since 2013. As a result, his talk at the Ludwig-Boltzmann lecture hall of the University of Vienna, which was also broadcast via livestream, was a sort of 'home game': colleagues from the discipline, media representatives and admirers joined the students in the 'fan zone'. The strong interest in his person is probably not entirely new to the darling of the public and Austrian Wissenschafter des Jahres (researcher of the year) in 1996: The list of prestigious prizes Zeilinger received is long and ranges from the Wolf Prize in Physics to the Grand Decoration of Honour in Gold for Services to the Republic of Austria. The highly endowed Nobel Prize is now certainly the culmination of Zeilinger's career.

As in the previous year, this year’s Prize is endowed with ten million Swedish kronor (around 920,000 euros). The 77-year-old quantum expert briefly considers his answer to a question from the audience about his plans for the prize money. Referring to his large family with children and grandchildren: "I'm sure to find someone," he smiles. (hm)

© Jacqueline Godany
© Jacqueline Godany
Anton Zeilinger studied physics and mathematics at the University of Vienna and wrote his doctoral thesis on Neutron Depolarization in Dysprosium Single Crystals under the supervision of Professor Helmut Rauch, and obtained his habilitation degree in 1979 at the Technical University of Vienna. He started his career in 1972 as a research assistant at the Atominstitut Vienna and was, among others, Fulbright Fellow at the M.I.T., working with the 1994 Nobel Prize laureate Clifford Shull. Furthermore, he was assistant professor at the Atominstitut Vienna, at the M.I.T. as well as TU Wien.

The mystery of dark matter