12. September 2022 by Daniel Schenz
A new phenomenon has taken the world of cell biology by storm, but its study requires people with a deep understanding of physics and biology. The University of Vienna offers a new PhD programme to nurse a new generation of researchers with the ability to think creatively in both fields. 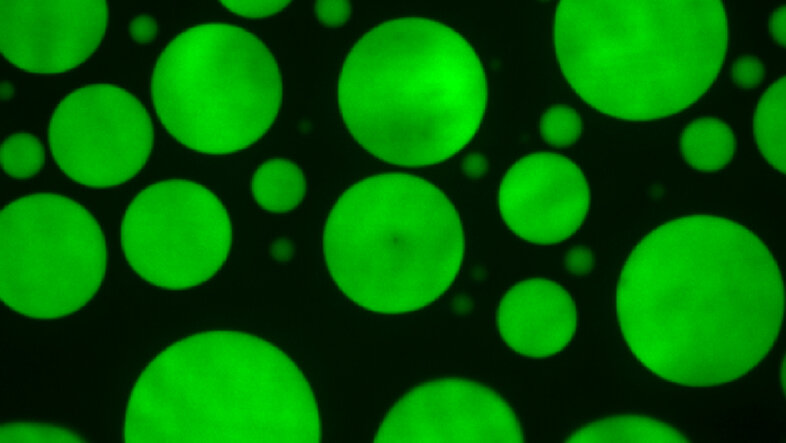 Liquid droplet compartments form in all kinds of cells and create different micro-environments within the cells' confined space. Understanding them is crucial because "they have fundamental relevance for explaining cellular processes," says Bojan Zagrovic from the University of Vienna. © Sponga et al., Sci. Adv. 2021, 7, eabg7653 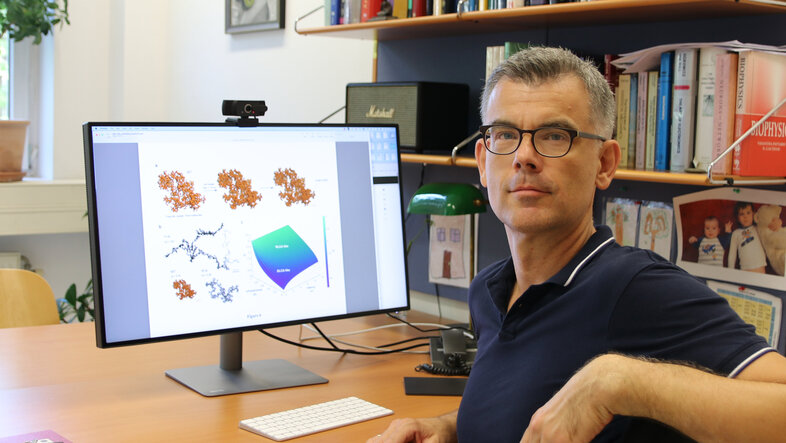 Biophysicist Bojan Zagrovic set up a new PhD programme that combines physics and biology to foster scientists who can tackle the phenomenon of liquid-liquid phase separation. © Daniel Schenz

As scientists discover new phenomena, they sometimes find that they lack the proper conceptual tools for their study – or the tools exist but are in the language of a totally different discipline. Cell biology is facing such a situation with the phenomenon of liquid-liquid phase separation – a new way of looking at how cell components organise and interact. "It seems that the cellular interior can be organised into very dynamic, non-membrane-bound compartments where some molecules are excluded and other molecules are concentrated," says biophysicist Bojan Zagrovic. The phenomenon is so fundamental "that dozens of new publications in biology having something to do with phase separation get published every day," Zagrovic explains.

In physics, however, phase separation is already an extensively studied subject. Zagrovic observed that, as a consequence, "we have started to have really advanced concepts from condensed matter physics or statistical mechanics of liquids seeping into the pure cell biology literature without really having programmes that would train students in understanding both languages." And the resulting problem is that, even in collaborations that produce top papers, physicists and biologists often have a difficult time understanding each other completely and after a while drop out from studying the phenomenon again, or "phase separately into their original fields" as Zagrovic puts it.

The advent of a new principle

We need to go back ten years to see how this situation in cell biology developed. With the advent of new microscopy and labelling techniques, scientists discovered a multitude of cellular compartments that are not confined by a membrane, like the nucleus or the mitochondria are, but rather appear to be simple 'droplets' within the cellular space that are different from their surroundings.

These droplets form through a process that is in some ways similar to the way vinegar drops form in oil: Molecules that strongly interact with each other (the 'vinegar') exclude elements of the surrounding medium with which they cannot interact (the 'oil'). The result is called an 'emulsion', while in the biological context, the droplets that are packed with proteins, nucleic acids and other biomolecules are called biomolecular condensates. 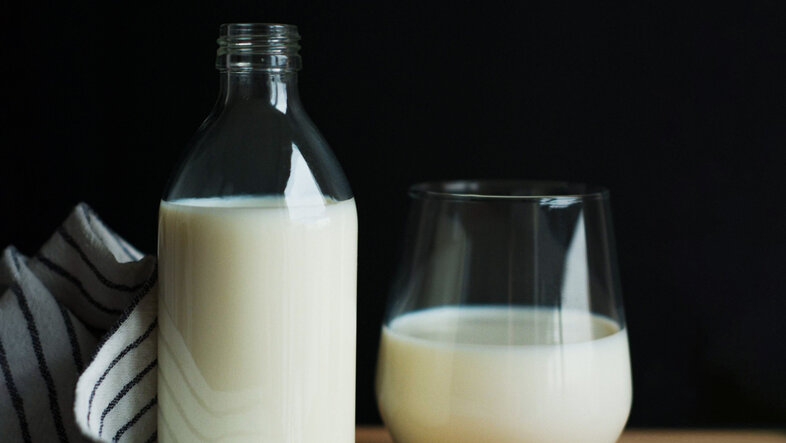 Milk is an emulsion, which is the result of liquid-liquid phase separation of fat and water. © Mary Skrynnikova via Unsplash 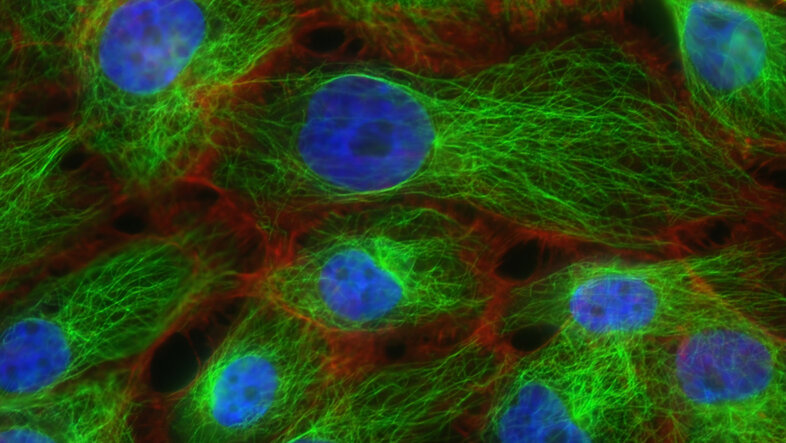 The most readily visible biomolecular condensate in cells is the nucleolus, the dark spot within the cells' nucleus. This is where rRNAs are made. © Christina Stuelten (National Cancer Institute) via Unsplash

The process itself is 'liquid-liquid phase separation', because two liquids separate from each other into different areas of space where different processes can then occur. Such biomolecular condensates have already been observed in all types of cells, from neurons to kidney cells and skin cells, and even in bacteria. Understanding them is crucial because "they have fundamental relevance for explaining cellular processes," as Zagrovic explains, continuing, "The appeal of condensates is that they could, in some cases, represent a physical correlate of the functional separation."

What exactly are biomolecular condensates?

Biomolecular condensates can occur in cells as a reaction to different environmental stimuli, such as cellular stress. They can also fuse, separate and disappear, evidencing that they really are droplets of liquids within the wider 'intracellular soup' produced by phase separation. Their function often relates to RNA processing (e.g. modification, storage or degradation). However, what counts as biomolecular condensate is currently under a lot of debate: While some researchers argue that the definition of 'phase-separated droplets' needs to take into account certain size limits to be functionally relevant (since aggregates of only a few molecules have different physical properties from larger ones), others include all aggregates of proteins with liquid (disordered) structure.

He found that a few other researchers at the Max Perutz Labs, a joint venture between the University of Vienna and the Medical University of Vienna, where his lab is based, but also researchers at the neighbouring IMBA and IMP had all started working on different aspects of liquid-liquid phase separation, or on topics involving that phenomenon, although not necessarily under that name yet. This led to the idea that "under the umbrella of liquid-liquid phase separation, we wanted to find contact points between our research agendas and carry out joint projects," which finally evolved into a new PhD programme. This programme is supervised by Zagrovic and seven other researchers mainly from the fields of structural biology and cell biology but also including a computational physicist from the University of Vienna. The programme is called ELLIPSE – which stands for 'Exploration, Innovation and Education in Liquid-Liquid Phase Separation' – and is integrated into the Vienna BioCenter PhD Program and supported by an FWF doc.funds grant.

Combining physics and biology to study how things are separating

ELLIPSE aims at teaching theory, simulation and experimental techniques in cell biology, chemistry and physics to "contribute to biology and physics becoming closer, and it will be embodied in students, PhD students and group leaders who can think productively and creatively on both sides," says Zagrovic.

Thus, accompanying the new ELLIPSE PhD programme, Zagrovic and his fellow teachers are also establishing a course that will be open to all PhD candidates of the Vienna Biocenter PhD Program as well as to faculty members. The initiators hope that these offers will not only spark new research projects on the interface between their working groups, but also settle some long-standing issues regarding liquid-liquid phase separation in the process.

One such issue is identifying the functional relevance of the phenomenon as opposed to just describing it in its various contexts. A related goal is "deciphering some of the key microscopic organisational principles" of the formation of biomolecular condensates, a problem that Zagrovic is especially interested in. He is hoping "that these principles will be simple and simply phraseable". But most importantly, Zagrovic wishes that "this programme will keep these two fields, physics and biology, together, that it will create a bond between them."

The ELLIPSE PhD programme has been set up for eight PhD students and will commence this October. All spots are already filled with an international selection of PhD candidates who call from Austria, Germany, India and Russia. (ds)

His group's main research interest focusses on using computational models to identify the rules behind the interactions between proteins and RNA, in particular in their unfolded form, in which together they form a biomolecular condensate. The hypothesis that the sequences of the two are chemically complementary to each other leads to a very natural explanation for the evolution of the universal genetic code.