Hoping that we can soon forget about Alzheimer’s

20. Jänner 2022 von Hanna Möller, Bernadette Ralser
A 'waste collection' tidies up our cells. If something does not go according to plan, serious diseases such as Alzheimer's or Parkinson's may develop. Molecular biologist Sascha Martens and his team investigate the associated process – autophagy. 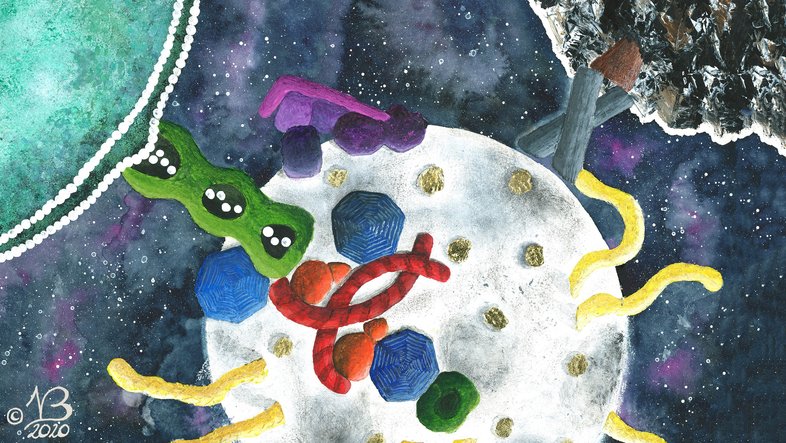 Sascha Martens and his team of 12 researchers work in their laboratory at the Vienna Biocenter to investigate a tiny mechanism happening every millisecond in every single one of our body cells: autophagy. © Verena Baumann

“If you're having a eureka moment, you are usually wrong,” says Elias Adriaenssens with a smile as bright as his white gown. The early stage researcher studied in Antwerpen and Oxford before joining the team of Sascha Martens at the Max Perutz Labs of the University of Vienna in spring. Already early in his career, the molecular biologist learned that it is better to keep new findings initially to yourself, no matter how exciting they may be. In most cases, the results are just too good to be true. When you go over them again, at the latest, they turn out to be wrong assumptions. We learn that major discoveries are rare in science: “Usually it is very small bits and pieces which, in the end, make the big picture.”

Lesen Sie auch
Meet the scientists
Cell researcher Sascha Martens and his team
Sascha Martens and his team are investigating the mysterious degradation pathways in our cells. In this video, the biochemists from the University of Vienna reveal what keeps them going – despite failures and being borne away: Team spirit, the passion for a topic and their common goal of making a difference.

Every day anew, the biochemist Sascha Martens and his team of 12 researchers work in their laboratory at the Vienna Biocenter to investigate a tiny mechanism happening every millisecond in every single one of our body cells. If something does not go according to plan, serious diseases such as Alzheimer's or Parkinson's may develop. Of course, their day-to-day research involves high-tech microscopes, 3D models, petri dishes and pipettes. However, putting their heads together is even more important, Justyna Sawa-Makarska says. She has been a member of Sascha Martens’ team from the very beginning and is today – eleven years and two periods of parental leave later – properly failure-tried: Discussing ongoing experiments, formulating and rejecting hypotheses, finding new approaches in a creative way if something failed, deciding on the next step, which may be scrapped again already in the next meeting: This is all part of the daily routine.

Autophagy: What to do with the waste in our cells?

This way, the cellular researchers keep failing on their path towards achieving their aim and, with their untiring commitment, they create the foundations for the treatment of neurodegenerative diseases. “A better understanding of processes in cells will provide us with new insights in what might be going wrong in Alzheimer’s and Parkinson's,” says Riccardo Trapannone, ‘understander of cells’ and postdoctoral researcher in Martens' team. The key process that the molecular biologists investigate in this context is the cellular waste disposal system. After all, also our cells produce ‘waste’ all the time.

An elaborate molecular surveillance force identifies suspicious substances – broken cell components, coagulated proteins or pathogens – and initiates their removal: They are packed in a ‘bag’ (a double membrane that enwraps the waste) and brought to the cell’s ‘recycling bin’ (the lysosome). There, the damaged cell components are decomposed and recycled. This self-cleaning process of the cell is called autophagy, which is Greek for ‘self-devouring’. “And it is a perfectly running, self-organised machinery,” team leader Sascha Martens tells us while an instrument behind him shakes samples of a cell vigorously. The two-times ERC grantee wants to understand in detail how molecules cooperate in the production of the autophagosomes because this is where diseases, ranging from infections to neurodegenerative diseases and cancer, originate.

In 2016, autophagy attracted the interest of the wider public. The Japanese cellular biologist Yoshinori Ohsumi was awarded the Nobel Prize in Medicine for his research on the cellular decomposition processes, paving the way for research into autophagy. “Out of curiosity, Ohsumi investigated cellular recycling processes in the model organism yeast. He could not have foreseen that he would receive the Nobel Prize for his efforts decades later and that pharmaceutical companies would invest a lot of money to advance the modelling of this process,” explains Verena Baumann, doctoral candidate and ‘yeast expert’ in Martens' team. Without such pioneering achievements and basic research, in which also Martens and co. engage at the Max Perutz Labs, application-oriented developments would not be possible.

Alzheimer’s often develops in our bodies for decades without being noticed, until the first symptoms show and the disease can be finally diagnosed. The tau protein is strongly suspected of causing the most common form of dementia worldwide. The protein forms elongated aggregations in our neural cells. These aggregates are usually detected and degraded by the autophagy machinery. This is very similar to Parkinson’s, the second disease that Martens' team investigates in relation to the cellular waste disposal system: “Here, an error occurs in the disposal of damaged mitochondria – the energy suppliers in our cells – in a specific part of the brain that is responsible for releasing the chemical messenger dopamine.” In the long term, this causes the typical symptoms of Parkinson’s: Patients can no longer control their movements, muscles stiffen and tremble also at rest. In Austria alone, around  20,000 persons suffer from Parkinson’s.

Martens and his team join forces to investigate Parkinson’s at the cellular level in a project backed by more than 7 million dollars of funding provided by the Initiative Aligning Science Across Parkinson's (ASAP), a research network that cooperates, among others, with the The Michael J. Fox Foundation. “You could compare it to a band: Some are excellent on the guitar and bass, others are drummers or convince with their vocals. But the song can only be perfect when being played together,” Martens is convinced. The experts on protein structures are based in Berkeley, the manipulation of cells happens in Australia, the University of Pennsylvania is one step ahead in neurobiology and the researchers at the Max Planck Institute in Frankfurt are preparing models. Sascha Martens and his team have specialised on copying the autophagy machinery in the laboratory. “We identify and reconstruct the central gears in great detail and try to put them together in the correct way,” explains the charismatic team leader.

Going awry is also a direction to go

Several proteins are involved in the process of autophagy. In more than ten years of tedious research, Martens and his dedicated team have managed to isolate dozens of these components and have been able to copy the early steps in the formation of the autophagosome. As a result, they play a leading role in international cellular research. Following the modular principle, they now want to decipher the next central steps in this clever machinery that tidies up our cells. For the cellular biologists, every day begins with the hope of identifying one of the deciding cogs in the wheel today – and almost every day ends with the resolution to try again tomorrow. They continue their research, hoping that we can soon forget about Alzheimer’s. (br/hm) 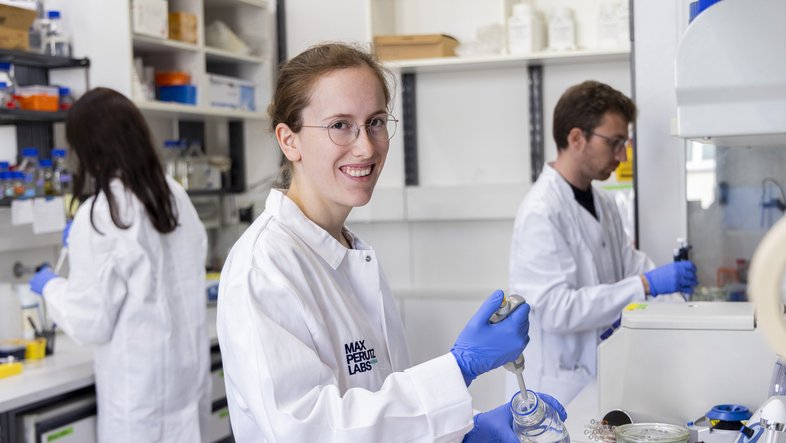 Master’s student Sonja Achleitner never really wanted to throw in the towel, but she was indeed rather clueless when her negative control substance in the laboratory appeared ‘positive’ for three months. Achleitner is convinced that setbacks are part of scientific research. She wants to continue in any case – soon as a PhD candidate in Martens’ laboratory. © feelimage / Matern 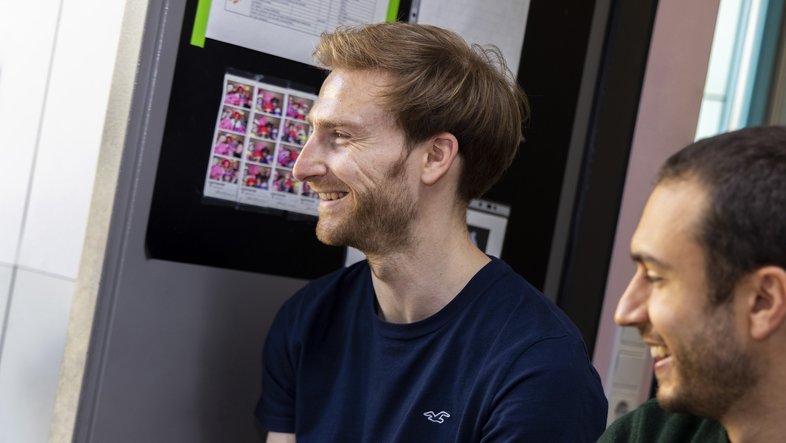 "Understanding autophagy better is key to ensure that we can get old while staying healthy!" To contribute to this cause, Elias Adriaenssens joined Martens’ laboratory at the University of Vienna in spring of 2021. © feelimage / Matern 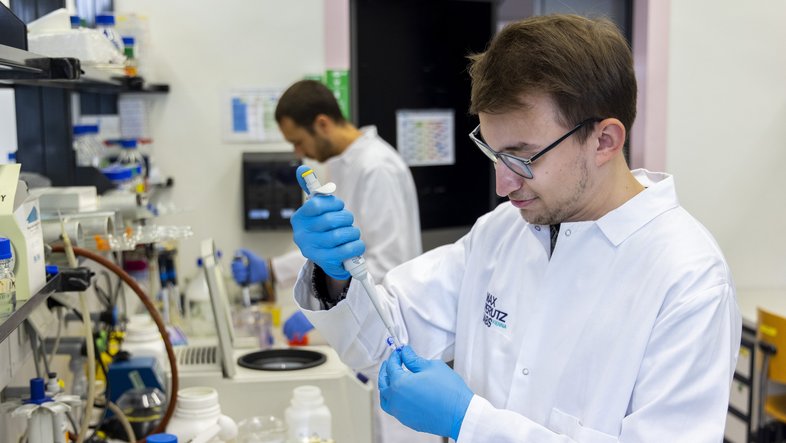 "Doing research basically means going through a continuous round of ‘detours’. In this process you make several new discoveries which end up being exciting and worth following up to," Bernd Bauer, doctoral candidate in the Vienna BioCenter PhD Programme tells us. © feelimage / Matern 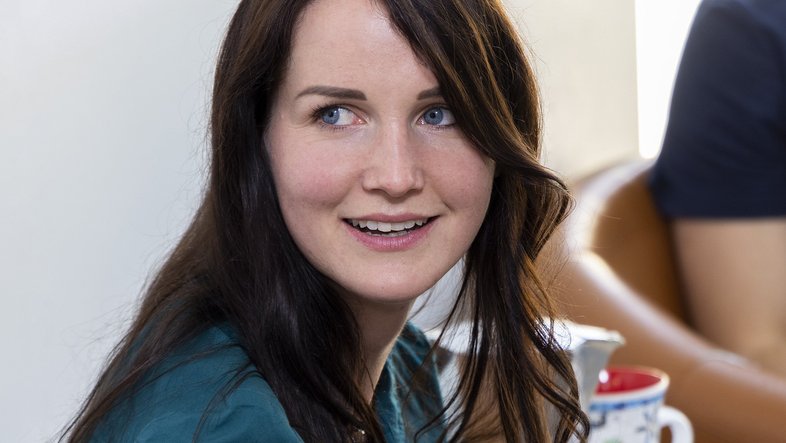 "Any solution found raises three new questions that I want to answer," says the doctoral candidate Verena Baumann. "Looking for solutions often requires the most creative ideas." Apropos creativity: Verena Baumann is not only an expert on cells, but also talented at drawing. The drawing of the cell on top of this article is the best proof. © feelimage / Matern 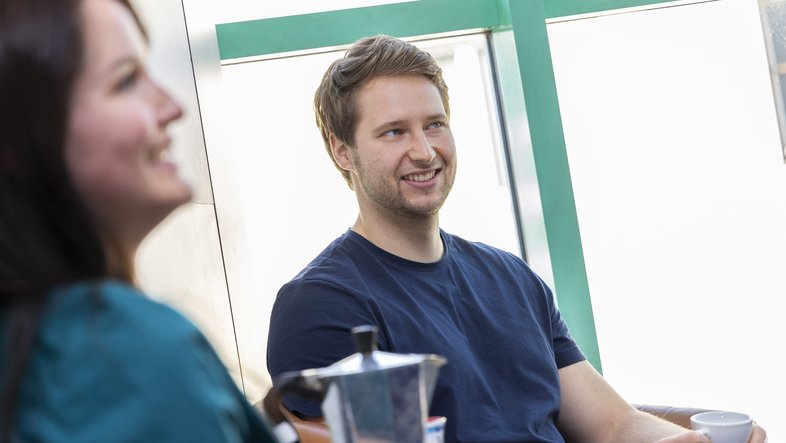 "Collaboration is the most important thing in our daily business: You can be an expert on your two or three proteins that you are working with but they are ultimately connected to a bigger picture". Doctoral candidate Daniel Bernklau focuses on the bigger picture every day anew. © feelimage / Matern 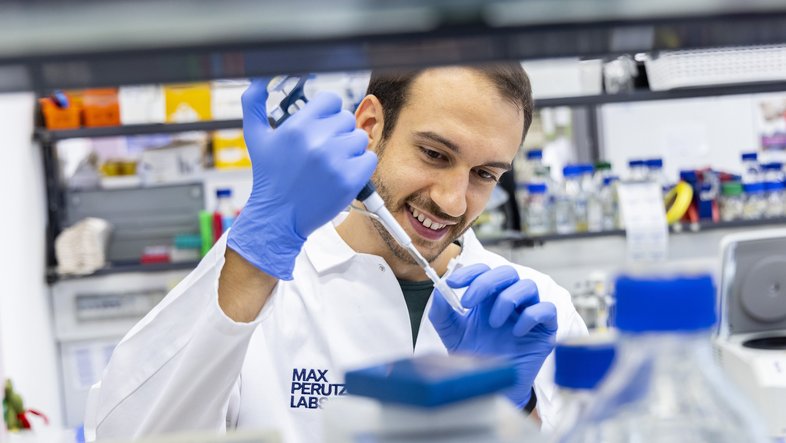 "We start to have a better comprehension of autophagy but we still do not know a lot about it," Alberto Danieli points out. Danieli studied molecular and cellular biology in Italy before joining Martens' team, where he currently develops his own research project. © feelimage / Matern 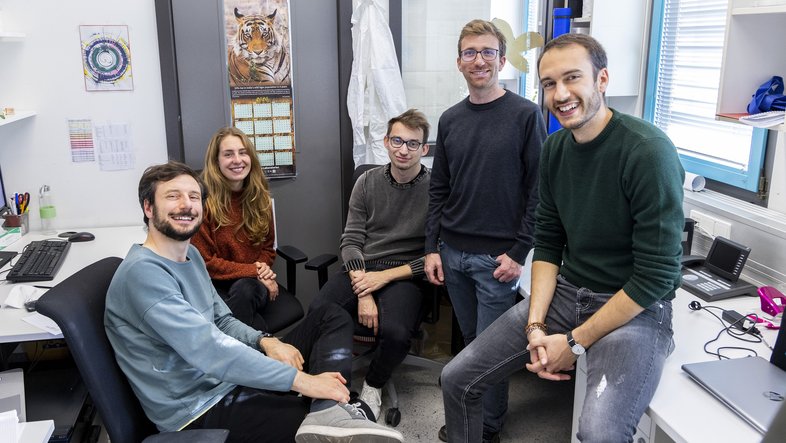 Luca Ferrari remains (almost) always optimistic: "Being wrong is often way more useful and educational than being right. The learning behind mistakes and wrong turns keeps me going." © feelimage / Matern 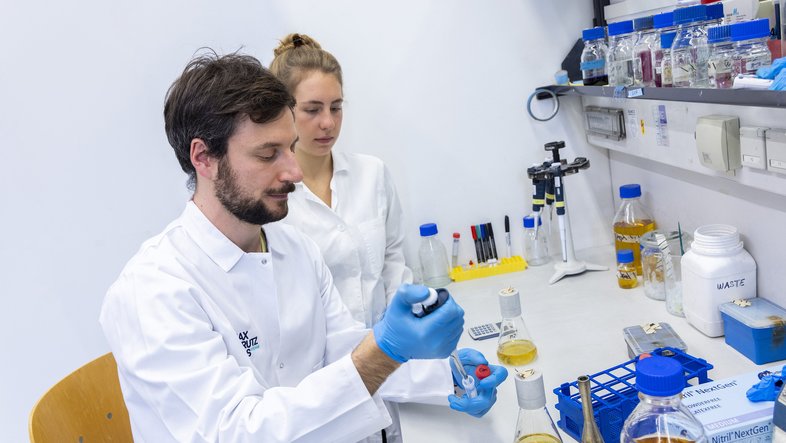 Lara Klune is part of the Alzheimer’s group: As a newbie in Martens’ laboratory, she has just started working on her master's thesis. © feelimage / Matern 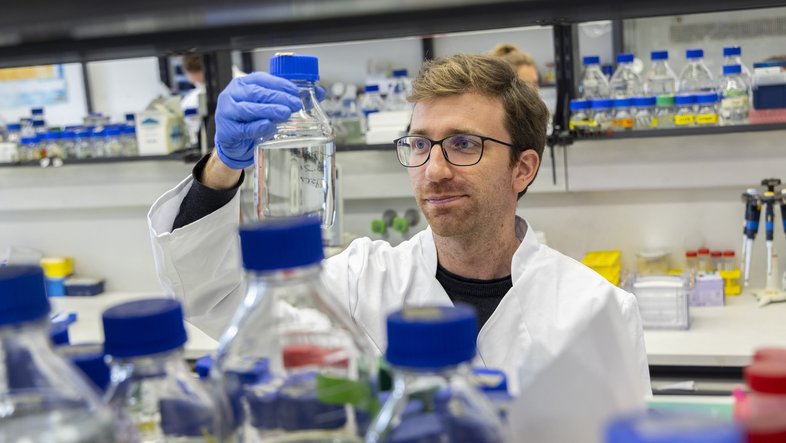 Riccardo Trapannone is a postdoctoral researcher in Martens' team. Together with his colleagues at the Max Perutz Labs, he focuses on sustainability in research (Climate@MaxPerutzLabs: https://www.maxperutzlabs.ac.at/about/sustainability). © feelimage / Matern 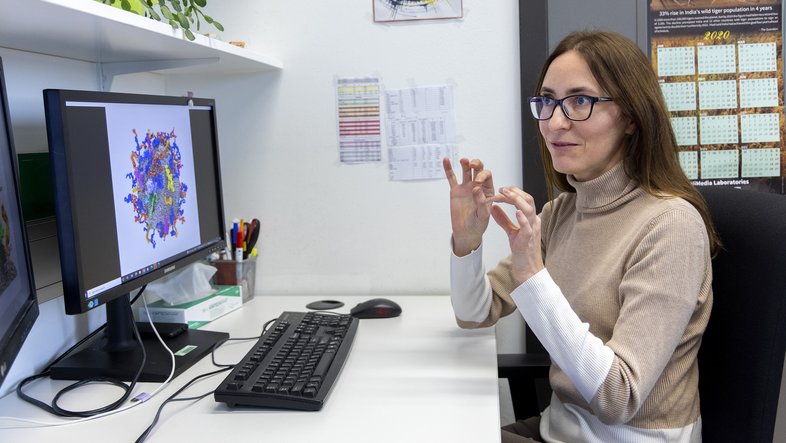 Many years in research have ‘immunised’ Justyna Sawa-Makarska against the ‘lab blues’ that you experience when an experiment fails. "When I get stuck with a project, I tend to dig more in the literature and initiate more chats and discussions with my colleagues. One never knows what brings an inspiration, it may be a remark or a question posed by someone whom you are talking with." © feelimage / Matern 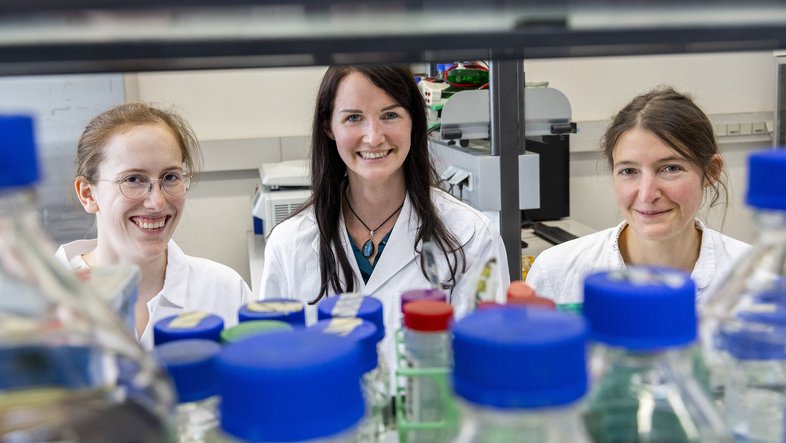 Martina Schuschnig is technical assistant in Martens' team and primarily works with yeast: "A perfect model organism that we can also apply to humans." © feelimage / Matern 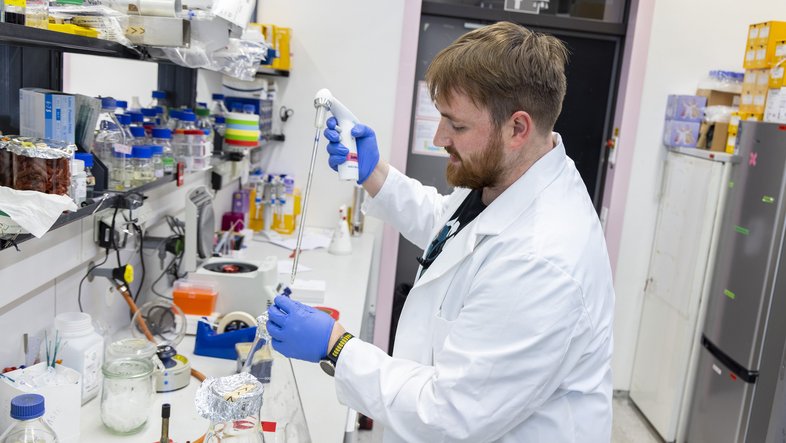 Stephen Shoebridge comes from Great Britain and works as a technician in Martens’ laboratory. In addition to protein isolation, his doctoral thesis deals with the fields of bioinformatics and statistics. He has a clear answer to the question of what motivates him: heavy metal. © feelimage / Matern
Sascha Martens: After working at the MRC Laboratory of Molecular Biology in Cambridge, Sascha Martens came to Vienna in 2009 to investigate the mechanisms of autophagy in the model organism yeast and in human cells.

Martens is now surrounded by a team of 12 international researchers and has received two ERC grants for his research endeavour. By the way, the band analogy for academic team work used in this blog contribution is not a coincidence: Had the native of Rhineland and father of two not become a passionate top researcher, he may have followed in the footsteps of Jimi Hendrix as a guitarist.